In the footsteps oh the condottiere .
The sites associated with Bartolomeo Colleoni in the territory if Bergamo.

Some people believe that the strength of personality of great men is such that their spirit continues to haunt the places where they once lived. Perhaps this is not just imagination. Even today, a visit to the places where Bartolomeo Colleoni spent his life arouses a strange, disquieting feeling; as though he really werestill bound to the settings of the numerous events in which he played a leading role. He was a military commander, a ﬁrst-class soldier; indeed, he can be considered the best of all in the late 15”‘ century. A daring megalomaniac, so sure of himself and his own importance as to demolish part of Santa Maria Maggiore to make room for his personal funeral chapel. But also a young man who from his earliest youth was forced to defend himself against his own family’s murderous designs and make his own way in life, counting only on his courage and his extraordinary talent as a risk-taking strategist. All in all, an outstanding ﬁgure in the history of Bergamo, and one to whom we can still feel close in the various places that witnessed his adventurous life: Solza, Malpaga and the Upper Town of Bergamo. 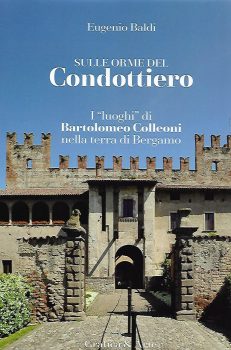