“… Wath exactly are the Orobie ?
Undoubtedly, the answer is mountains. Connected to these elevations is the existence of a multitude of people from Bergamo – thousands, even tens and tens of thousands of people, an infinity if we start the count from the primitive hunters who descended into the valleys on the hunt for game – in addition to the discovery of minerals and the ability to exploit
the resources of the terrain. Perhaps it is to this we owe the development of trade between the plains and the Alps, the exchanges between peoples from far away and even the first settlements. It was not by chance that a village was founded at a strategic point near the mouth of two valleys, through which it was possible to access the heart of the mountain range we
call the Orobie. From the roots of this primitive group of huts came Bergamo. And it is from this starting point – with the consultation of maps, literature, excursions, the climbing of hills and mountains, recollections and memories — that begins the exploration of a territory that is unique in some respects, embracing not only the “great beauty” of the extraordinarily rich historical, artistic and cultural heritage but also the exceptional environment where an encounter with nature is able
to arouse great emotions and the desire to relive them. …”  (Pino Capellini) 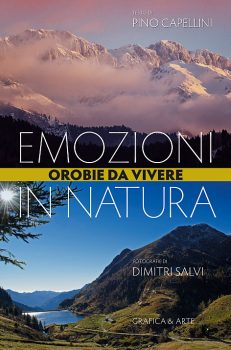